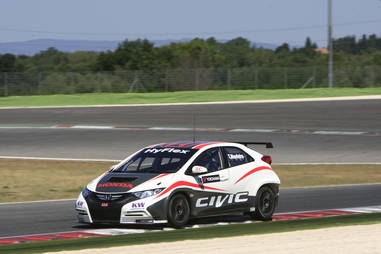 Honda has begun the track testing of its FIA World Touring Car Championship race car, the Civic WTCC. Testing started earlier this week (31st July and 1st August) at the Vallelunga circuit, Italy and follows the car’s ‘shakedown’, which was successfully completed on July 27th at Vairano, a circuit near the J.A.S. Motorsport factory in Milan. Testing will continue throughout the year and is led by 2009 WTCC champion Gabriele Tarquini.

Starting at Suzuka in October this year, Honda will enter three races of the 2012 FIA World Touring Car Championship with one car, driven by Tiago Monteiro. All of the 2012 testing and race results will be fully utilised to further mature the Civic WTCC for full entry in 2013.

The final exterior of 2012 Civic WTCC race car was also unveiled today. The new race car is the result of extensive wind-tunnel testing and features an extended front and rear skirt and other additional aerodynamic elements. Combined, they enhance the Civic’s smooth air flow creating a coefficient of drag (CD) value that is best in class for a C-sector 5door hatchback. The car sports a dynamic and stylish livery, which aims to accentuate the lines of the new Civic, as well as imbue the race car with Honda’s motorsport and racing pedigree.

“To see the finished Civic finally on the race track is an extremely emotional moment for the whole team. I am so proud of everyone involved. They have managed to accomplish so much in such a short period of time. Everyone has been working tirelessly for this day to happen and the new car and engine are no less than our expectations.The initial track testing has already provided us with a lot of feedback and data, but the road to Suzuka in October remains a long one.  This isn’t the end. It’s just the beginning. From here we will make ourselves even busier.”

Gabriele Tarquini, Honda’s 2012 development driver said: “Although I’d never driven the new Civic before, funnily, when I sat in the seat for the first time I immediately felt I was in a Honda. The body work is precise and the engine feels great. But this is just the first track test, so there is so much more for us to work on.

The car looks beautiful too and will, I’m sure, wow all the WTCC fans around the world when it makes its debut in Suzuka later this year.”

The Civic WTCC is powered by the HR-412E, a completely bespoke 1.6 litre 4 cylinder direct injection turbo-charged petrol engine, fully conforming to FIA regulations for the WTCC.

Both Gabriele Tarquini and Tiago Monteiro will compete for Honda in the full FIA World Touring Car Championship in 2013.