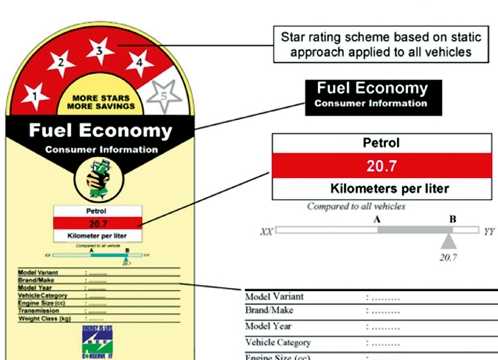 The average fuel efficiency of the products from top ten car makers in India is 16.42 kmpl. This is expected to go up to 18.15 kmpl by 2015, and to 20.79kmpl by 2020. As improving efficiency will cost carmakers money in R&D SIAM has asked the government to loosen the prescribed norms. The government, however, thinks that the targets set by it are quite liberal and can be achieved without much hassle, saying that expecting manufacturers to improve efficiency by 2.8 per cent every year is not asking for too much. The new norms will help the Indian car market match up with the global gold standard car markets such as Europe and America in due course.

Carmakers who are not able to meet the criteria will have to cough out upto Rs 10 lakh as penalties. Penalties will continue to be levied until corrective measures are taken, at the rate of Rs 10,000 per day (that would be easy, won’t it) upto a cap of Rs 46 lakh. If a manufacturer fails to comply even after that, its model may be removed from the market.

While we welcome the government’s move to introduce such norms in the country, we wish it realized its own duty also before being so strict about rules. Fuel quality is integral to factors such as tail pipe emissions and power output. Unfortunately the fuel quality in India is much worse when compared to developed nations. More than 90 percent of the fuel stations still serve 89 Octane fuel, which more often than not is adulterated, or mixed with chemicals to bloat up the volume. The amount of suspended particles also is higher in the fuel sold in India. Because of this, the latest engine technologies cannot be employed in cars here. The government will also have to look at the quality of roads and traffic management. After all, a fast commute delivers much better fuel efficiency and pollutes the air much less than while being stuck in a jam forever, idling, burning fuel and emitting gases for no reason. Who is answerable for the efficiency losses and pollution caused in such scenarios? Should there be a penalty on the government too for such situations?

Like always, the government is trying to look proactive, without owning up to its own responsibility entirely. Would you like to add a few clauses to the ruling? Do let us know.