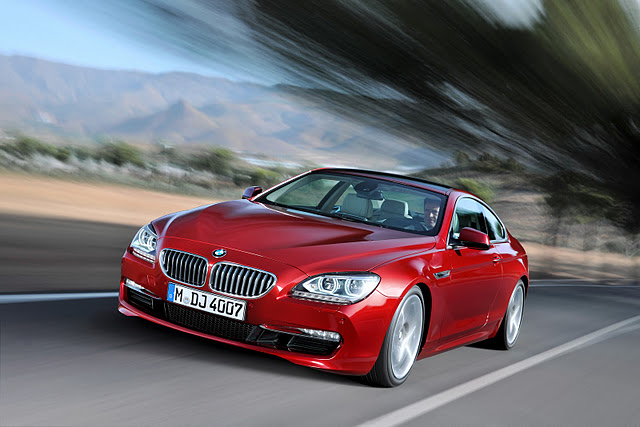 Without any aggressive campaigning or hoopla, BMW recently launched its flagship 2 door coupe, the 6 series. Replacing the flagship E 63/64 code-named cars that formed the popular last generation of 6 series sports cars, the new coupe is the code name F13.

The new 6-series takes forward BMW’s design revolution that began with legendary Cristopher Edward Bangle. And the revolution continues under the watch of Adrian van Hooydonk, successor of Chris Bangle whose mould-breaking work with Chris on the famous Z9 Gran Turismo concept car of 1999 laid down the design elements and philosophy for many Bimmers to come.

The new 6 series seems to borrow the shark like styling of the nose from the original 6 Series (E24), that was first launched in 1976. The nose features highly technical headlamp design coupled with an option of LED corona lenses, a slightly forward-leaning trademark kidney grille to go with the shark like effect and also an air dam that runs along the width of the bumper in its lower part. The long hood has more visible framework  than one on the E 63/64. It is clear that BMW’s 3D Panel Pressing technology has been put to optimum use.

The rear has L letter shaped tail lamps and use similar LED treatment to that seen on the 5-series saloon. The boot looks more integrated with the design of the rest of the car than that on the predecessor and and talking about the boot, it boasts of a subtle integrated lip spoiler.

The coupe borrows the 4.4-litre twin-turbo V8 petrol motor from its soft top sister in its 650i version. An option of the 640d is for those who want their sports car to run on the stickier fuel.  The diesel motor has a cubic capacity of 3 litres and produces a maximum power of 313 bhp.

Unlike the last gen M6 which had an option of a 6 speed manual or a  7 speed SMG gearbox, all the versions here come with a standard 8 speed automatic tranny.

The petrol-powered 650i costs Rs 85 lakh, while the 640d diesel is priced at Rs 75 lakh, both prices ex-showroom, Mumbai. Now what every performance enthusiast will wait for will be the delicious and high on steroids-The M version that can safely be predicted to take the battle to the likes of Audi R8.