Home Bajaj Auto Bajaj Pulsar 200 NS: Images, specs and everything else you wanted to know 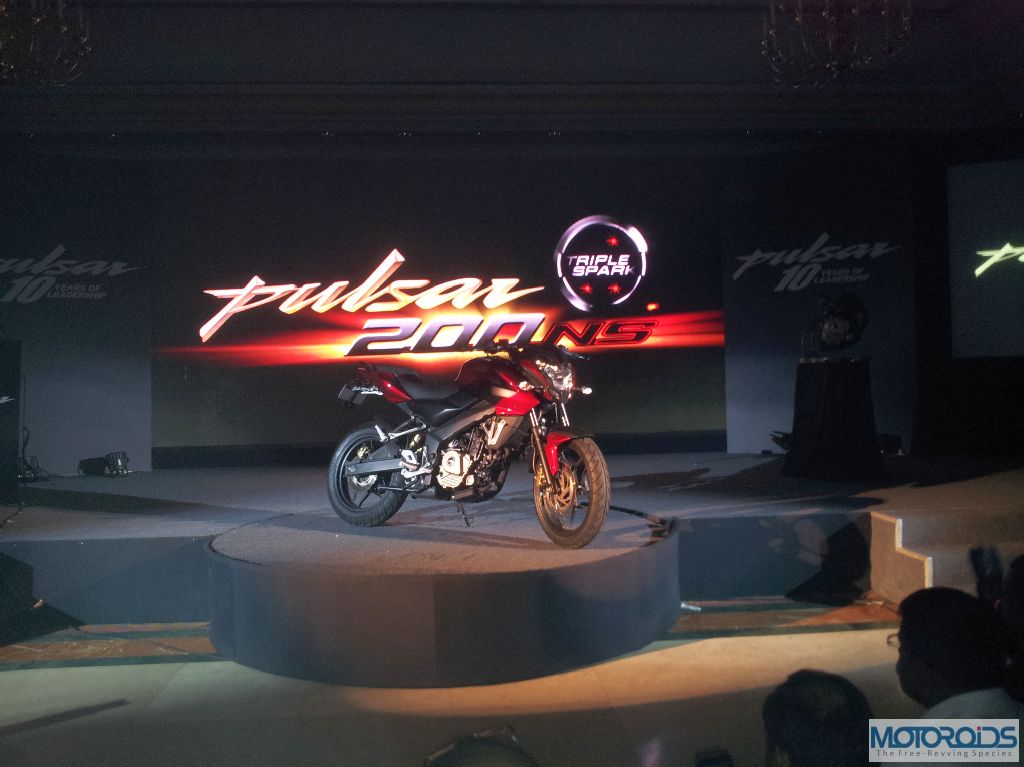 Finally, the most anticipated bike of the past few years has been revealed. The next-gen Pulsar, as it was known earlier, has been presented to us bike enthusiasts by Bajaj Auto as the Pulsar 200NS. With a water-cooled engine encapsulating 200cc and dishing out as much as 23.5PS of power, the new Pulsar has definitely delivered to the expectations of its hardcore fans. Icing on the cake comes with the pricing, which, Bajaj Auto’s MD Rajeev Bajaj insists will be less than a lakh of rupees when the bike hits the streets in April 2012. There must be a lot of questions in all your minds. So while everyone asked questions at the unveiling press conference, we sat quietly, diligently noting down all the points to make sure that we could document a little more about this sensational new bike than others. 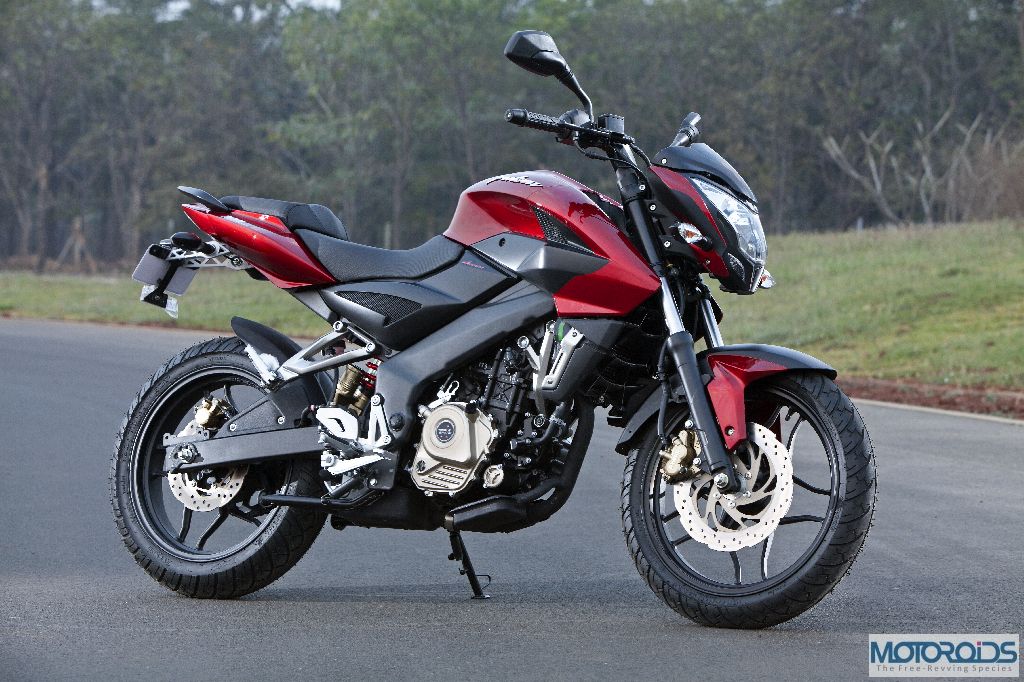 Mumbai, 30 January 2012: A little more than 10 years since the original Pulsar was launched, Bajaj Auto today unveiled the Next Gen Pulsar 200NS. This new Pulsar is all set to re-define Motorcycling technology and design as-much-as the original Pulsars did way back in 2001.

At the heart of the new Pulsar is its cutting-edge engine which sets new benchmarks in performance, emission and incidentally also fuel efficiency. The DTS-i (Digital Twin Spark-ignition) technology launched in 2003 marked a unique first in the history of Indian Motoring. The new Pulsar takes this technology altogether to another level with a SOHC 4-valve Triple Spark engine controlled by an advanced Electronic Control Unit for an absolutely unmatched performance. To support this exhilarating heart-pumping performance the bike comes with liquid cooling and a six speed gear box.

The Pulsar design character has evolved with the performance & dynamics. It’s become stronger, more aggressive with a street fighter stance. The look just begs you to ride it. Once astride, the sporty speedo console, triple-tree clip-ons, the signature clips and the illuminated switches evoke the design, fit and finish so far exclusively reserved for much more expensive super sports bikes. The new 200cc Pulsar is probably the most stunning sports bike in its class oozing raw muscular appeal.

Commenting on the launch, Mr. K. Srinivas, President-Motorcycles, Bajaj Auto
said: “Pulsar has now celebrated a ‘Decade of Dominance’ with 10 years of leadership in the Indian performance motorcycle market. These sporty iconic motorcycles have been a testimony to the company’s engineering prowess. The Pulsar 200 NS showcases next leap in technology and design and will set the standard for others to follow.
We believe that 2012-13 will be an exciting period where Bajaj Auto will excite customers both here and abroad,” Mr. Srinivas added.

The Pulsar 200NS will be commercially launched beginning next Fiscal.

Now, for the finer details, which you won’t probably find anywhere else. 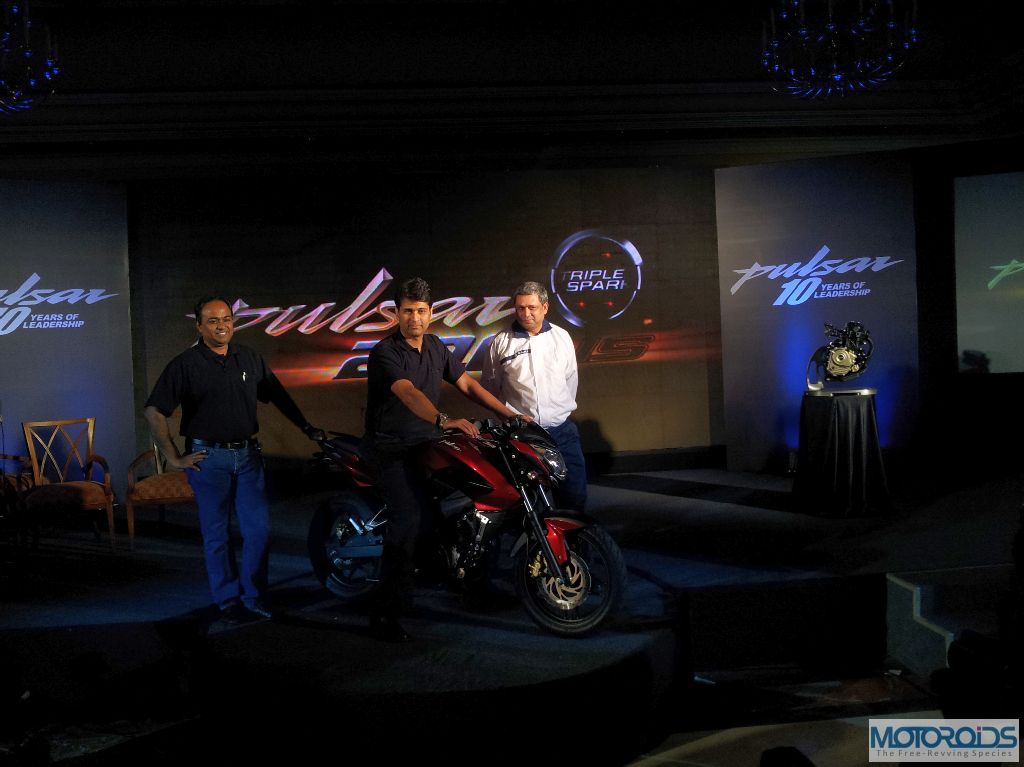 So what exactly Bajaj was thinking when it went to the drawing board for the Pulsar 200NS.

The good blokes at Bajaj Auto Limited assert that a product should be clearly defined in a customer’s mind. The brand recall should be very strong – someone who has seen the product once, should be able to identify it easily. Close your eyes, think of the Pulsar and what you should see should be very clear. There should not be any ambiguity about the visual traits of a product to start with.  Wgile describing this though, the company’s spokesperson went on to compare the Pulsar with the iPads, iPods and the legendary Hollywood stars in terms of brand identity.

Also, the company wanted to be ahead of the game in terms of the product’s performance, and wanted to satisfy the burning desire of its end user to own something out of the ordinary, but at an affordable price. It was with such ethos in mind that the Pulsar was designed and developed. And we would like to think that Bajaj have done a fairly good job of it. The bike is still very much a Pulsar, very affordable, and very desirable, even with plenty of other products in the market residing in its own segment.

Can we see the new Triple Spark technology trickling down onto smaller bikes such as the Discover?

The answer, for now, by Rajeev Bajaj is a staunch no. For now, the technology will remain only with the new Pulsar. As time passes by, and there’s something more fancy for the Pulsar, the triple spark technology may descend down onto some other products from the family. But there’s nothing of that sort in the pipeline as of now.

So will the current Pulsars be phased out?

Mr. Bajaj thinks that nothing in this country gets phased out. The decision, to phase out a product, according to him, lies with the customer, and not with the manufacturer. He would rather let the market decide when the time for the old Pulsars to be phased out arrives. For now, the current lineup of Pulsars will keep selling alongside the new machine.

What happens to the Probiking showrooms?

No ARAI figures have been given out. The company claims 58kmpl, when the bike is ridden at speeds around 50kmph.

What’s the production capacity for the new Pulsar?

Bajaj Auto’s Chakan plant is capable of producing as many as 100,000 Pulsar 200NS + KTM 200 Dukes (combined) per month. The assembly line is flexible, and depending on the demand can ramp up production quickly for any given model.

Where does Bajaj want to position the new Pulsar?

Bajaj Auto Limited thinks that the Pulsar 200NS is a worthy competitor to the likes of the CBR250R and even the KTM 200 Duke. The strategy, however, is to provide equal or better tech at a more affordable price. That’s the reason why the Pulsar will be price below the Rs 1 lakh bracket, to make it more accessible.

Will the Pulsar 200NS be exported?

The company anticipates that the domestic demand for the bike will keep the plant busy for at least 6-12 months after its launch. Any decision on exports will be taken only after that phase passes by.

Are there more products lined up from Bajaj stable?

The Pulsar has been unveiled for the current quarter. More products are lined up for introduction later in the year, the details on which will be divulged only in the next quarter, or later.

Does the Pulsar 200NS share its components with the KTM 200 Duke?

MD Rajeev Bajaj first says NO. And then adds that even if it did, he wouldn’t want to share those details, as Pulsar and KTM 200 are two different products by two different brands with their own distinct identities. There are, however some synergies between the two brands, two of them. First, KTM does share its knowledge about motorcycles and the software used with Bajaj. Secondly, KTM benefits from the economies of scale of Bajaj Auto. BAL MD insists that the components in two similar machines to share synergies don’t have to be same as long as they share the manufacturing facility and the cost overheads.

With the launch of the new Pulsar, will the company increase its ad spend on the brand?

Again, MD Rajeev Bajaj thinks that there is an essential difference between automobiles and other products. Unlike your TV or your refrigerator or sofa, you cannot hide your automobile within the four walls of your house. The motorcycle, in the Pulsar’s case will go on the road, and be seen by millions to speak for itself. ‘We don’t want to be seen as a manufacturer who spends a lot on advertising with no products on the road’. In a nutshell, the ad-spend for the new Pulsar won’t be too much. Ad spend, according to Rajeev Bajaj, in the Pulsar’s case won’t be a strategy to acquire customers.  It would, instead be a ploy to make the existing customers feel proud about the product they own, and talk about it positively when they discuss it with their friends and family.

The company will rely more on positive press and PR to create a positive sentiment about the product.

What new products are expected from Bajaj in the year ahead?

Global economy is going through a recession. Does that have an effect on your plans?

Rajeev Bajaj brings out the example of Apple. The company recorded a net income of 13.1 billion dollars previous quarter. If such is the case, then where exactly is the recession? Moreover, recessions keep coming and going. It’s not a new phenomenon for the world economy. Our job is to make great motorcycles and that’s what we’ll try and do best. We are currently the No.1 motorcycle manufacturer in India by profits, but not by volume. At 26% market share, we think we have a lot of scope to grow in the domestic market. There is ample opportunity there to bother about recession just yet.

Does Bajaj plan to export the Pulsar to developed markets such as Europe and America?

The company’s discussions with KTM suggest that a motorcycle like the Pulsar 200NS will be valid in any market. Ditto with Kawasaki. The company believes that it does have the best motorcycle in its segment. However the company still has a very small presence in those markets. Maybe, in future, the company may look at these markets for expansion.