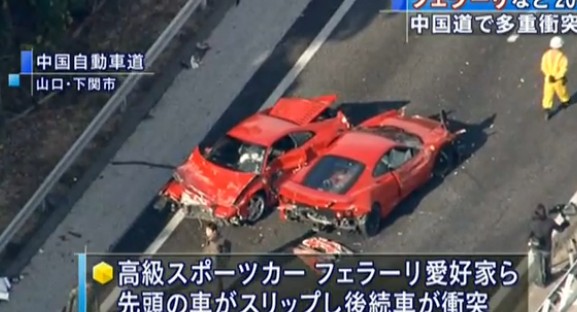 This sounds absolutely absurd, but as you will see in the video that follows, its entirely true. In a bizarre supercar pileup, 8 ferraris (Including Ferrari 355s, Ferrari F430s, Ferrari F360 and Ferrari F512), a Lamborghini Diablo and 3 Mercedes-Benz cars got totaled. There was also a Nissan Skyline and a Toyota Prius which were a part of the pileup. One of the Ferrari drivers who was leading the pack lost control, with one of the most exotic car pileup ensuing.

Here’s a video by one of the Japanese TV channels depicting the aftermath. Enjoy, or mourn, as you like.