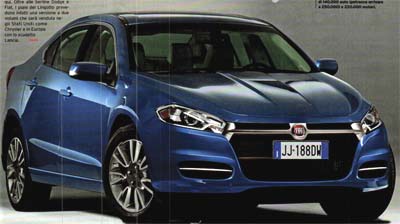 I attended the global launch of the Fiat Linea back in 2007 in Turkey in one of the most lavish launch events I have ever witnessed in my career as an auto journalist. About 1000 journalists were called from across the world in Istanbul, where Fiat had created an artificial island for the launch event in the middle of the Creek of Bosphorus with the beautiful Bosphorus Bridge right in the sight.

As you would reckon, it has been some time since the car was first launched. Almost five years on its time Fiat gave us an all-new version of the car. It seems the Italian carmaker is at the job already. The company has, apparently redesigned the car and is ready to present it to the world in 2012 as a Year 2013 model.

The pictures you see here scanned allegedly from the pages of a European car magazine shows what the next generation version of the Fiat Linea will look like. In the first look, the sharp, angular and bold front seems to be a strong departure from the classy and elegant exterior styling of the current gen car. Apparently the styling is representative of the final product and the production model should not differ much from what you see here. The US version of the car will be introduced in January 2012 at the Detroit Auto Show.

The new Linea will adopt new gen engines. There are rumours of the car getting a 1.4-liter MultiAir engine with variable valve timing. The new age engine which won the 2010 Engine of the Year award is capable of producing 170 PS of peak power and 250 Nm of impressive peak torque. That’s the kind of output you usually expect from a 2.0+ liter engines. The engine will be mated internationally to a six-speed dual-clutch transmission offer a sporty drive experience.

We think the new Linea looks appealing. It may have adopted a different design philosophy, but it’s bolder, and has more character and attitude than the current design. What do you think?