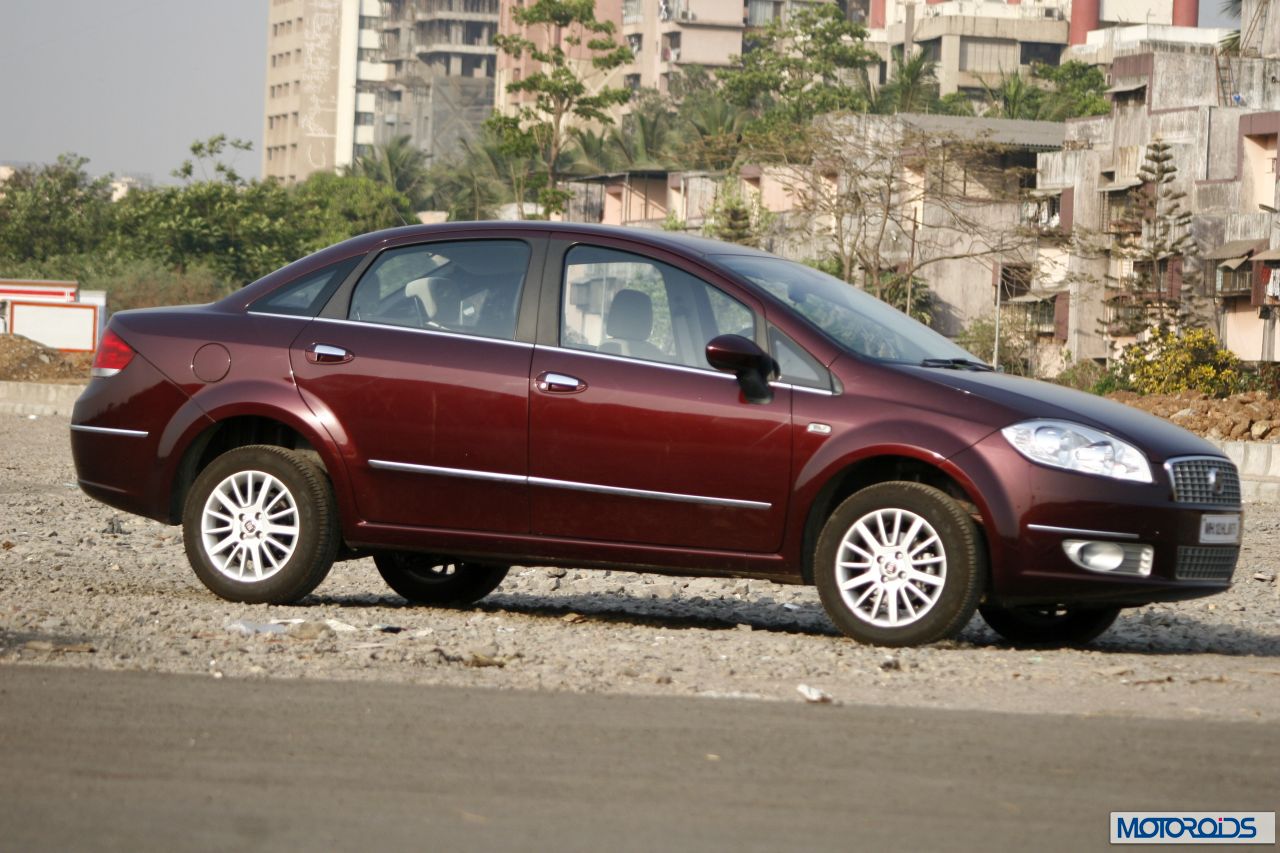 There’s no dearth of motorheads who would vouch for the aesthetic appeal and dynamic prowess of the Linea. The Linea always has, and still manages to be one of the nicest products this side of Rs 10 lakh. All those qualities, however, have not been able to turn into sales volumes for the brand. Fiat is taking corrective measures to alter the trend, with the recent decision to build exclusive dealerships being the most important one. Fiat plans to have as many as 40 exclusive dealerships in 20 cities by the end of 2012. Apart from that the Italian carmaker has also introduced the 2012 versions of the Linea sedan and the Punto hatchback. We got our hands behind the wheel of the 2012 Model Year Linea recently, and realized that small but significant changes have made the Linea an even more value for money proposition. Here’s a quick review. 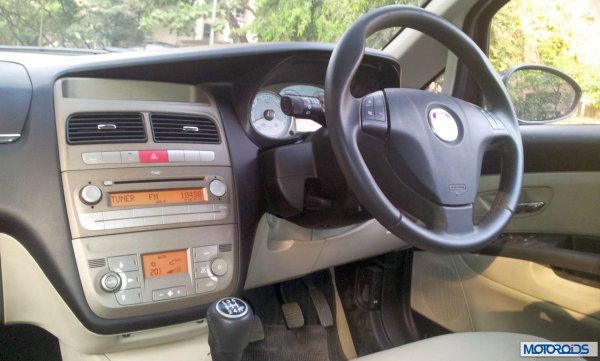 Let’s make one thing very clear at the outset – the 2012 Linea is more of a mild upgrade and doesn’t feature any big changes over its predecessor. Visually, the new car doesn’t look any different from the previous version on the outside. Fiat has increased the ground clearance to let the Linea gobble potholes with more confidence. The ride quality of the Linea has always been good, and now with the increased clearance it literally wafts over even the most vicious potholes. At 185mm, the ground clearance on the 2012 Linea is 20mm more than the earlier version. The ride quality, especially at lower speeds has most definitely improved, but the increased clearance has also resulted in a minor drop in the handling quality. Steering feedback has dwindled, and you can now feel a bit more body roll around corners. The gap between the wheel arches and the tyres has also grown, making it slightly odd to look at from certain angles. As a remedy, Fiat is offering 16 inch alloy wheels for the top of the line Emotion variant. Having said all that, however, the Linea still remains one of the most sure footed and visually appealing cars in its segment. 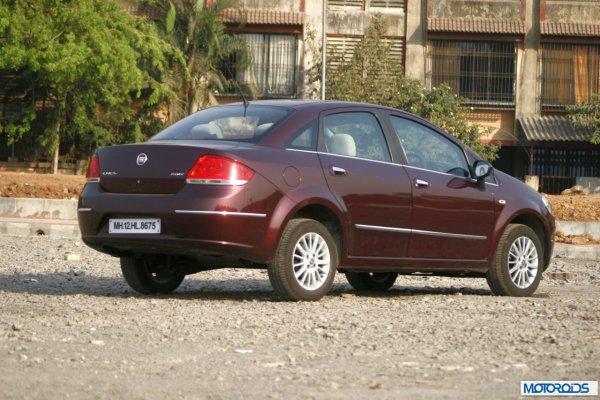 Another major change made to the 2012 Model Year Linea is the democratization of features across variants. The company has brought more features to the lower variants so as to make the Linea a better VFM proposition. Fiat India have also done away with the top of the line Emotion variant for the 1.4 FIRE petrol version. The petrol powered naturally aspirated Linea now comes only in Active and Dynamic variants. The 1.3 Mutijet diesel variant, however, is still available with the top of the line Emotion variant.

There aren’t any significant differences between the Dynamic and Emotion variants now though. Most features have trickled down to the middle-of-the-range Dynamic variant, which now represents great value. The only features differentiating the Emotion and Dynamic Variants are Folding rear seat, leather upholstery (fabric for Dynamic) and 16 inch alloys (15 inch for Dynamic). Key safety features like ABS and dual front airbags have been included in the Dynamic variant now. Apart from that, new features such as light sensing automatic headlamps, rain sensing wipers and a new, two tone light colored dashboard for a more spacious and airy feeling have been introduced. Needless to say, with all those fancy features now available even in the base Active variant, the Linea looks like a mouth watering proposition. 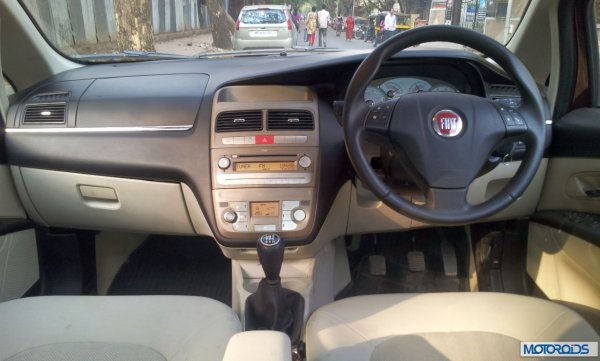 Inside the cabin, the most significant change is the new two tone dashboard with lighter colours enhancing the feeling of space. The quality of materials, including the fabric upholstery seems to have gone up. While only the Emotion variant gets leather upholstery, a leather steering wheel and gear knob is standard even in the more basic Dynamic variant. The instrumentation cluster is familiar, and so is the dashboard. Air conditioning is claimed to have been improved, and we experienced it first hand, as we didn’t have to wait much before the searing hot cabin of our car parked in an open parking lot was cooled down to a  comfortable 22 degrees. The rear AC vents help a great deal in making the back benchers feel comfortable without taking much time. 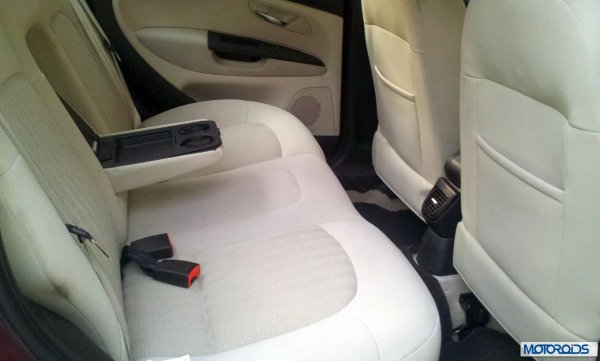 Talking of the air conditioner, we must mention the rather confusing controls for the A/C. The display on the center control doesn’t indicate which vents (front, lower or windscreen) are put to work on pressing which button. While it can be figured out on fiddling with the buttons a little, it’s still not the most convenient system around. Also, the lack of bottle holders within the cabin is a big bother. There is no slot to accommodate a one liter bottle of water, which could be quite a pain sometimes. There is a pair of cup holders right below the central console, but not wide enough to let the most common bottle size (1-liter) fit. The space within the central armrest comes as a big respite in a cabin which otherwise lacks in terms of cubbyholes and storage spaces. The instrumentation backlight also looks rather dimly lit, and can be difficult to read with ambient light from the city streets.

On the move, the Linea feels sturdy as ever. As we have always maintained, the Linea is one of the most sturdily built C segment cars, and it shows right from the time you get in and slam the door in. The 1.4 liter FIRE engine is a sweet sounding motor, and emanates a throaty note when revved hard – something which would sound music to the enthusiasts’ year. However, this engine isn’t quite powerful enough, with every other competitor offering a more powerful option. The engine feels sufficiently powerful and very tractable within the city with just the driver and a passenger on board. However, load the car up, turn the A/C on and the relative lack of power shows its ungainly face. When loaded, the Linea 1.4 requires far more gearshifts, asking to be revved slightly harder. 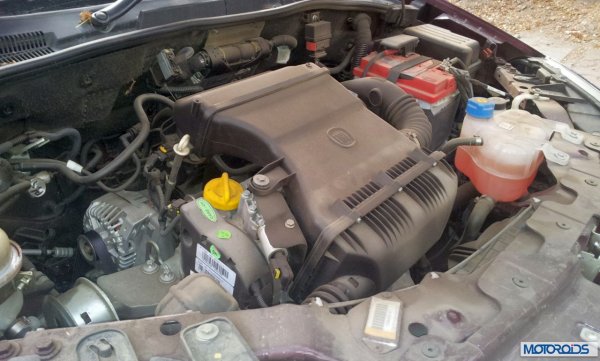 Fiat also has the 1.4 T-Jet trubo petrol with 114PS, which really delivers great mid-range performance and aces its counterparts in most departments, but comes for a price.  The 1.4 FIRE engine produces a rather low 90 PS, while the 1.3 Turbojet diesel dishes out 93PS. However, the 1.3 diesel with its 209 Nm of torque is more tractable and fun to drive.

As mentioned earlier, the increased ground clearance has definitely helped make an already pliant ride quality into an absolute glide. With the increased ground clearance the Linea’s capability to take even the most vicious undulations in its stride without as much as a squeak has become exemplary. It is, most definitely, one of the most comfortable cars in its segment. The jacking up of ground clearance has gone a long way in helping the Linea negotiate even the most stupidly built speed breakers without a whimper. All that comfort and clearance, however has taken a bit of toll on the sure footedness of the car. Not only has a fair degree of body roll crept in, but the tactility at the steering wheel has also been lost by a fair amount. The Linea still has two very confident pairs of wheels though, and is leagues ahead of the wallow-wy City and Verna in terms of composure. 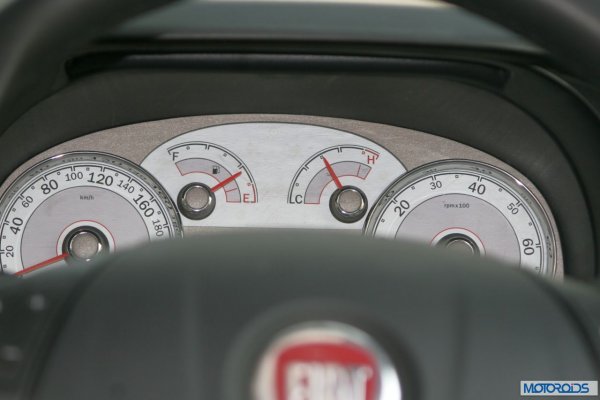 As always, in its 2012 version too, the Linea manages to present itself as a great product. No one ever faulted the car for its qualities as a product anyway. Inclusion of new features, changes made to the interior and bringing more features to the lower variants has made the new Linea even more appealing. The timeless exterior still looks stylish as ever and doesn’t warrant any upgrades. Even after so many years of its launch, we consider the Linea as one of the most sophisticated and classy automobile designs around. On the inside, the Linea may not look the most glitzy, but it has most of the features that matter in place. It may not have the most appealing cabin, but with those retro dials flanking a modern trip computer readout, the Linea makes quite a statement about its understated sophistication.

The 2012 Model Year Linea is a truly competitive product, marred by a bad image about the brand in people’s mind. With an elaborate strategy to enhance its distribution network, Fiat is working hard to rekindle us Indians’ love affair with the Italian brand. We sincerely hope they succeed. 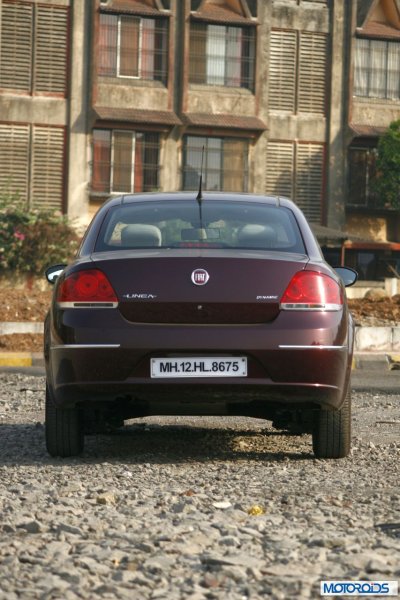